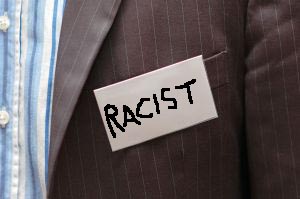 As I was catching up on blog discussions from the past week, including the excellent assignment on RaceChangers.com about transracial adoption and Third Mom’s response on her blog, I was struck by how often in our discussions about the personal choices that go into the decision to adopt transracially or internationally I come across the sensitive subject of whether or not a person who adopts transracially without much education, knowledge or willingness to examine the racial complexities of transracial adoption can be considered racist – even if these adoptive parents don’t make “racist” statements.

There it is, the dreaded “r” word: racism. Can one be racist if one is ignorant? seems to be one of the questions that is posed. “Let’s not use the “racist” word,” some suggest. After all, I am guessing that to outright call someone a racist is to conjure up images of the KKK or Nazi Germany. But one doesn’t have to wear a swastika on their upper arm or a pillowcase on their head to be racist. For me, one of the most frightening aspects of racism is the subtle, quiet kind. At least with outright, blatant racism I know how to protect myself.

Here is what wikipedia has to say about racism:

The term racism is sometimes used to refer to preference for one’s own ethnic group (ethnocentrism), fear of difference (xenophobia), views or preferences against interbreeding of the races (miscegenation) and nationalism, regardless of any explicit belief in superiority or inferiority imbedded within such views or preferences. Racism has been used to justify social discrimination, racial segregation and violence, including genocide.

The term racist, when used to describe someone who supports racism, has been a pejorative term since at least the 1940s, and the identification of a group or person as racist is nearly always controversial.

Why are we so afraid to be called a racist?

I have a couple of thoughts regarding this. First of all, I understand
that nobody likes to be called a racist. I know I don’t. Does that mean
I don’t ever have racist thoughts, just because I don’t like to think I
do? If I say something offensive but have no idea what I said was
offensive, does it make it all right that I said it? Or should someone
inform me of my offense?

Our first response to an accusation of being a “racist” is
defensiveness. “How dare you call me a racist!” we yell. What we do and
say after the accusation is what separates us. Some of us strike back
in anger and defensiveness. Maybe we’ll claim the accuser is actually
the racist (or call it reverse racism).

Or maybe some of us will try and prove how un-racist we are (my best friend is Black, Asian, Latino, etc).

Still others of us will offer a half-assed apology that is aimed
towards criticizing someone’s “oversensitivity” rather than truly
attempting to make amends. This is most often done through the guise of
“I’m sorry you were offended by my comment.”

Did you see how that works? You’re sorry that the other person was
offended – not, that you were sorry you said something offensive. A
not-very-subtle difference.

When someone says we are racist or calls us on our unintended racism,
when we react only out of anger and defensiveness we close ourselves
off for expanding our understanding of racism.

I am reminded of the documentary film, The Color of Fear, which I
recently showed to my social work students. During the introductions
one of the participants named Gordon claims that he’s a racist who has
been trying to unlearn racism. Immediately, viewers think, oh wow, he
admitted he’s a racist. Many people think he’s going to be the problem
in the movie. However, as we learn fairly quickly, it is actually
another man, David, who says the most racist things. It turns out
Gordon is actually quite an ally to people of color and many of my
students later said, “He [Gordon] was not racist at all! Why does he
say he’s racist?”

Gordon understands that as much as we all work towards unlearning
racism, like everything else in life, becoming un-racist is a process
and a journey – it’s not something you master some day. Most of us will
spend our entire lives unlearning racism. The dangerous ones are those
who claim they’re not racist and therefore, have no need to continue to
examine their own behaviors.

In other words, racism is a label that is slapped on to “some” people
but maybe is one that all of us should wear. The people who proudly
claim they’re not racist raise my suspicions. We have all internalized
beliefs about people who are different than we are; we sometimes act on
those beliefs both in external and hidden ways. It is only when we are
willing to recognize our racism that we can do something about it.

Many of us transracially adopted adults have lived with a lifetime of
subtle, ignorance-based racism. Perhaps we’ve internalized it and
perpetuated it ourselves. Many of today’s adoptive parents claim that
it was only parents of “the older generation” that were racist. But let
me tell you that working in the adoption field today in the late fall
of 2006 – I come across prospective adoptive parents whose beliefs
about children of color are EXACTLY the same as “my parents’
generation” over 35 years ago.

Some scholars use the term "aversive racism" to refer to the
“subtle, unintentional form of bias that is presumed to characterize a
substantial proportion of White liberals” (Son Hing et al, 275)*

Because they have internalized liberal egalitarian values, aversive
racists are motivated to experience themselves as being nonprejudiced,
but at the same time have unconscious, unavoidable racist feelings or
judgements of which they’re typically unaware (ibid). Aversive racists
will express these racist feelings or judgements in situations where a
non-racialized justification to do so exists. "Thus, aversive racists
are able to discriminate without acknowledging their prejudice because
they excuse or justify their behaviour on‘reasonable’ grounds” (ibid,
290). It’s likely that most people living in a liberal democratic,
racially-structured society are aversive racists.

Claiming ourselves not racist means that we are allowing our ignorance
to continue to disguise our racist beliefs and attitudes. Ignorance may
be bliss, but it does not excuse one from working towards un-learning
racism.