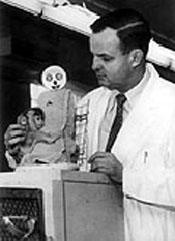 I got dissed a few days ago over at my friend Made In Korea‘s blog. A commenter, in critiquing how we transracial adoptees speak out over what we see as problematic issues in our community, called me disrespectful to my parents for naming my blog, Harlow’s Monkey.

This isn’t the first time my blog name has sparked controversy. My brother-in-law, whom I’ve known for almost 20 years and who has witnessed my journey into adoption identity proclaimed it "harsh" towards my parents. Others who don’t know who Harlow was, or what the monkey experiments were, often make statements about how my subject/name is "depressing" upon learning about the monkey experiments.

So since this has become a recent hot-button item again, I thought it was time to discuss the subject of Harlow and his monkey experiements in a little more depth, and the reason why I chose this name for my blog. Keep in mind that I am not an expert on Harlow or his science; I just found that there are a lot of parallels between Harlow’s experiments and adoption and Harlow was attempting to learn about the nature of attachment and what happens when infant monkeys are removed from their mothers.

I am far from being creative or unique in choosing to name my blog, Harlow’s Monkey. Many others before me have made the connection to adoption. Harlow himself compared the baby monkeys in his experiments to human children and aimed to study how maternal deprivation and love and attachment influenced human beings.

Harlow’s famous monkey experiment hinged on the question of whether infant monkeys removed from their mothers would respond to substitute wire monkey "mothers" that provided food (physical needs) over terry-cloth covered wire "mothers" without food (comfort). Harlow’s results found that these infant monkeys would cling to and respond to the soft, fabric covered monkeys over the plain wire "mothers" with food, thus  showing that nurturing and the need for affection were greater than the need for food.

This is an important concept in terms of adoption, because often the philosophy around adoption was centered around "feed ’em, clothe ’em and put a roof over their heads" – in other words, the first two levels of Maslow’s hierarchy of needs; what I call shelter (food, clothing and shelter) and safety. This is why most people have a strong and negative reaction to institutions such as orphanages or group homes; it just isn’t possible to mimic or provide enough one on one attention and comforting to an infant or a child in these types of living situations. Even though they may be cared for, and even loved, by the caregivers in these institutions, there is just not enough to go around. So, most people would make the argument that a living situation that is more "home-like" or "family-centered" is better for attachment for children. Hence the reason some countries, such as Korea, have since tried to move to a foster care system of providing for abandoned or relinquished children instead of orphanages, like the ones I lived in in the early 1970s.

However, it isn’t just in adoption that we sometimes see this played out negatively. There are stories in the news all the time about infants and children who are fed , clothed and sheltered but remain underweight and underdeveloped. These kids are called "failure to thrive" and the reason for their subdevelopment is due to lack of attachment by caregivers. Additionally, the era of the Harlow monkey experiments came at a time when the social philosophy of child rearing was that of distance and emotional detatchment. The 1930s through the 1950s was the time of Dr. Spock, of doctors advising mothers to use formula and bottles versus breastfeeding and there was a strong philsophy of not overindulging babies and children and putting them on strict schedules for feeding and sleeping.The popular book "The Care and Feeding of Children" published between 1894 and 1935 advocated against "the ‘vicious practice’ of rocking a child in a cradle or picking her up when she cried" (Holt, 1841-1935).

Harlow studied this concept in a second phase of his experiment. He separated the baby monkeys into two groups; one with the terry cloth mother, one with the wire mother. Both groups of monkeys ate the same amount but the behaviors of the wire monkey babies were markedly different than the cloth monkey babies. Especially important to note is that those monkeys who had the cloth-covered "mothers" were able to calm themselves better when frightened with stimuli; they also had quicker resolutions after being frightened to base-level behavior. The wire-covered monkey babies, however, had great difficulty when frightened. They did not go to their mother; instead, they would screech, rock back and forth or throw themselves on the floor.

Harlow’s experiments showed us that attachment and bonding is more important to the infant monkey than just providing for physical needs. That is, we want to develop in our children the next few steps on the Maslow’s hierarchy of needs; what I’ve called socialization (family, friends, community – in other words, a sense of belonging); self esteem and self-actualization.

According to Harlow’s own words (Love in Infant Monkeys, Scientific American 200, June 1959):

Thus all the objective tests we have been able to devise agree in showing that the infant monkey’s relationship to its surrogate mother is a full one. Comparison with the behavior of infant monkeys raised by their real mothers confirms this view. Like our experimental      monkeys, these infants spend many hours a day clinging to their mothers, and run to them for comfort or reassurance when they are frightened. The deep and abiding bond between mother and child appears to be essentially the same, whether the mother is real or a cloth  surrogate. . . .

The depth and persistence of attachment to the mother depend not only on the kind of stimuli that the young animal receives but also on when it receives them. . . . Clinical experience with human beings indicates that people who have been deprived of affection in infancy may have difficulty forming affectional ties in later life. From preliminary experiments with our monkeys we have also found that their affectional responses develop, or fail to develop, according to a similar pattern.

In naming my blog Harlow’s Monkey, I was not aiming to "diss" my parents. Harlow’s Monkey was named to illustrate the broader issues that I see in adoption. Whether it’s "harsh" or not, the truth is that for those of us who were adopted, we are being raised by "substitute" parents. Just as we children are often substitute children for our parents, especially those of us who were adopted as a result of our parents’ infertility.

This is especially important to me because when we think about transracial adoption and international adoption, we social workers look at the homestudy and see that yes, this parent or these parents can meet the physical and safety needs of a child; and they seem warm and caring too. But without an ability to provide for our emotional and psychological comfort around our racial and cultural needs, we are left alone like Harlow’s rhesus monkeys and their wire-only mothers.

Do I think that I am part of a large, social experiment? You bet. Just like Harlow’s rhesus monkeys, we transracially and internationally adopted persons have been poked and prodded and been the focus of many evaluations and studies in order to see whether it "works" – that is, are we psychologically all right after being removed from our families and communities of color into mostly white, middle- to upper-class families? How are we transracial and international adoptees faring, considering that the current federal legislation in the United States prohibits considering the cultural and racial needs of a child?

Harry Harlow didn’t walk into his lab, conduct his experiments on one baby monkey, then call it a day. He repeated his experiments, like good scientists do, in order to achieve some amount of reliability and validity in his results.

On a micro level, I am just my parents’ daughter, sister to my siblings, auntie to my nieces and nephew, grandchild and cousin.

But I am also part of a macro system of children who were born under circumstances that led to my being placed in a substitute home. Over 200,000 of us from Korea alone.

When people focus on individual cases, one (or two) parent(s) and one child, it’s easy to forget the larger societal patterns that happen as a result. We are talking about diasporas and migrations. We are talking about displacement and traumas. I am not "dissing" my parents, because they did what they were advised to do by their social workers and adoption agency. They raised me as as if I was a white child born to them, just like my siblings.

It is the larger, societal issues, such as the philosophy of the times that advised social workers 20 years ago to raise their children like "white, biological children" that trouble me. Harlow’s Monkey is my way of lifting the micro-level veil over our eyes and examining the macro- and global issues around the practice of adoption.