I found this via one of my favorite new blogs, Sunshine Girl On A Rainy Day. She is doing for adult fosterees what many of us adult adoptees are doing – educating others about our experiences. She had this report in her blog. Warning: this is very shocking.

Welcome to an orphanage in Bagdad, where 24 special-needs orphans were found tied to cribs.

Originally, boys and girls were housed together, but then someone separated the boys and sent them to an orphanage with no governmental oversight. 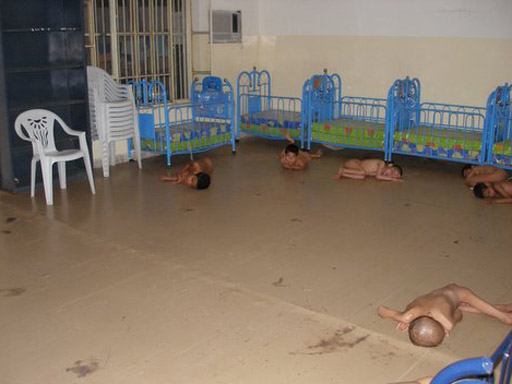 Witness their condition:
– Naked
– Starving
– On the concrete floor
– Lying in their own waste
– In temperatures up to 120 degrees

Was the orphanage poor?
No, it was well-stocked with food. The central office of the facility was well-kept, in stark contrast to the feces-ridden squalor surrounding the children. Brand-new cribs found in storage still had plastic covering their unused mattresses. Clothing was folded neatly, designated to be sold at the black market, rather than worn by children.

But the caretaker of the facility followed his greed, rather than caring for the children with whom he had been entrusted. Staff members cooked only for themselves.

What will be the future for Iraqi orphans?
As a CBS reporter has commented, "How a nation cares for its most vulnerable is one of the most important benchmarks for health in any society."

Last year, the United Nations estimated that there were about 40,000 orphan children in Iraq. That number is steadily rising… The current war has cost many children one or both parents.

I would like to know if there is any way around this. Even in the best of the Iraqi orphanages, the children within are starving for love and attention, desperate for human contact. During an NBC interview, one little girl called the cameraman "Daddy."

Without loving intervention, these children might grow up to be future terrorists. Quammara al-Janni, coordinator of orphan programs through the Red Crescent (the Arab Red Cross), reminded reporters that Saddam Hussein was raised as an orphan.

Breakdown in families, breakdown in communication
In April 2007, while working to reunite family members, social workers discovered that 100 Iraqi street children thought to be orphans (86 boys, 33 girls) actually had family members somewhere in Iraq who were willing to take them in. In most cases, the parents had died, and children didn’t know how to contact relatives.

This might be an important first step to take: Trying to reconnect children with extended family members in Iraq…

© 2006-2022. This content on this web site is copyrighted. Content may not be republished, reprinted or repurposed without permission. Short excerpts and links are encouraged, but for permission to quote an entire post, please email me at harlowmonkey at gmail dot com.