Director of biggest adoption agency in the Netherlands resigns after pressure of
Dutch government to keep quit about the Chinese Adoption Scandals. 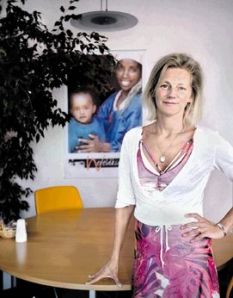 Ina Hut, the director of Wereldkinderen, says that the Central Authority in the Netherlands forced her not do to any investigation regarding the Chinese Adoption Scandals because it might hurt the relationships with the Netherlands.
Due the difficult relationship between Ms. Hut and the Dutch
government, to keep a transparent overview of the adoption process,
especially regarding Chinese Adoptions, she could not continue her work
with a clear consciousness she said in an interview on television last
evening.

Hut says, that the economic interest and the push for children by
prospective 'adoptive parents' are more prevailing than the interest of
children. After almost seven years of fighting, against the corrupt
system, from within, she is tired, says Ina Hut in Trouw this morning.

The ministry of justice said in an official response
of Hut her resignation, that she wanted to do an 'undercover
investigation' and that such a activity would compromise the
relationship with China.
Ina Hut answered that; she never spoke about an undercover operation
but just wanted to have clear answer from both Central Authorities
about the stolen and 'trafficked' children from China. Due the unclear
situation after the visit of the Dutch Central Authority to China and
the ongoing messages of stolen children from China, Ina Hut was
questioning the adoptions from China. Wereldkinderen stopped adoption
from China this year, except the so-called 'special needs' children.

A Dutch article about Hut.

** ETA 2:11 p.m. Thanks to reader Mirjam, who passed along this information to me.

The "homo-lobby" is about adoption from
the USA to the Netherlands. The only country that allows adoption by homosexuals
is the USA, so when Hirsch Ballin (minister of Justice) announced he wanted to
stop adoption of newborns from the USA
there was an online petition, signed by 16534 people. (click here for the petition).
In the end Hirsch Ballin gave in. (here is the press release)
Another article in English on Ina Hut.

I was interviewed for this piece about the influencer who relinquished her autistic Chinese adopted son (who she monetized on Instagram and YouTube). . . https://www.mother.ly/news/myka-stauffer-adoption
Repost of @goalkorea 's post. Covid-19 support for Korean adoptees living in Korea.
What are you doing with your day off (if you have a day off, that is)? I'm re-reading research by awesome adoptee scholars for my upcoming presentation. #adopteevoices #adopteesaretheexperts
Join me this coming Saturday when I will present for @affcny on adult adoptees research! https://affcny.org/programs/education-training/online-adoption-foster-care-conference/
Book chapter deadline coming up soon so this is my weekend. #knowourhistory
×
%d bloggers like this: