I recently had a conversation with another transracial adoptee who mentioned that many years ago she had tentatively attended some Korean adoptee social events but quickly felt she didn’t fit it. Part of it was a political view on their adoption –  the division between those who felt they had good adoptive experiences and those who did not. The retreat lasted almost twenty years and now, this TRA is venturing out into the adult-adoptee world again.

I didn’t mention which “side” (i.e. the “good” or “bad” binary) this particular adoptee was on because it doesn’t matter – I’ve seen this dynamic happen in both directions. Those who consider their adoptions to have been really fulfilling often are very resentful of adoptees who critique adoption. And those that critique adoption are quick to dismiss other adoptees as “drinking the Kool-Aid” or being in denial.

Adoptees are like anyone else, human first. We are cliquish, and judgmental and so what? It’s frustrating that this is used against us by others to diminish and dismiss the crux of what our common message is – that it is OUR message, however messy and complex and contradictory it seems.

Adoptee engagement happens across many levels – some people feel the political pull more strongly than others. Some want to effect change from the inside out. Others feel the only way for change to happen is to agitate loudly and boldly. Some don’t want to be political at all and want to ignore the difference and some choose to assimilate to the larger dominant society’s view of adoption.

My personal view is that it takes both – change from within and pressure from without – to make the most impactful changes on structural inequalities that lead to current adoption pratices.

I like visuals and thought I’d share a model I put together to help me think about this idea of adult adoptee activism. I created a version of this model when I was a fellow in the LEND program a few years ago (and have recently adapted it thanks to feedback from some folks). At the time I created this, I was thinking about the activism that adult adoptees were doing in ways both large and small, inside and outside of the institutional structures. I was greatly informed in my thinking by Robert O’Connor, a mentor and friend, who really shared the idea of what he called the “capitulate or militate” spectrum. I realized that what I was seeing in the adult adoptee community was really similar to what I’d seen in other civil rights arenas – for example the civil rights movements for African Americans, the Disability Rights movement, feminism, LGBT rights. 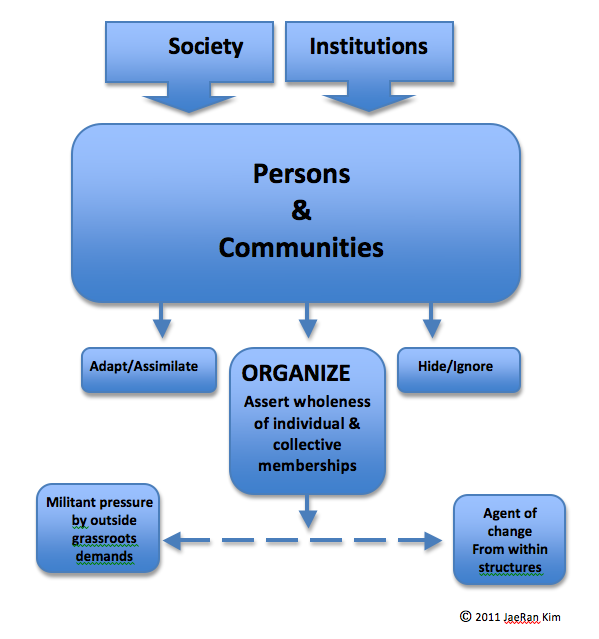 And some choose activism- those who reject the other options of either assimilating or hiding and instead organize for social change. By organizing with the goal of asserting the wholeness of individual and collective identities and inclusion and ownership of our own narratives, and equal rights, people and communities strategize along the continuum of working outside the institutions or within. Let me be clear that these are not the only ways to be an activist. Being an activist may mean supporting adoptee projects and programs, artists, attending adoptee social events, etc. [Edited to add: And research!! How could I have forgotten to add conducting and supporting research!?!] Activism can mean many things.

I hope that this model has been helpful. Clearly, it’s a much simplified version of how I see activism but as all models are, it just provides one way of conceptualizing and thinking about a set of complex ideas. I think that those of us working to enact change in the adoption realm can see that we have a lot of good models to draw from and for me personally, it was really helpful to see our struggle for equality is tied in so much to others’ freedoms as well.