Many of  my friends know that way back when, my first undergraduate (almost) degree was costume and textile design. I dropped out of school a semester before finishing my program. When I decided I was ready to finally finish my degree, I went into social work but I have maintained my love of textiles. I am particularly drawn to art that combines textiles and social justice and sometimes imagine that I will someday create some of my own art using textiles.

So imagine my delight when I saw an announcement on Facebook that a Korean adoptee artist and writer, Mary-Kim Arnold, had an installation, (Re)dress: One for Every Thousand as part of the CON/TEXTILE/IZED exhibit at the Jamestown Art Center in Rhode Island. Imagine how excited I was to know I was going to be at the Rudd Adoption  Conference in Massachusetts during the exhibit’s run at the JAC. As soon as I learned about the exhibit, I started planning how I could see it while I was in MA and specifically planned a flight home that would allow me to drive down to RI to see the exhibit. Along with my friends Angela and Adam, we left early on Saturday morning and road-tripped it to beautiful RI. Not only was it wonderful to get a chance to see this exhibit, it was really meaningful to see it with two other adoptees. 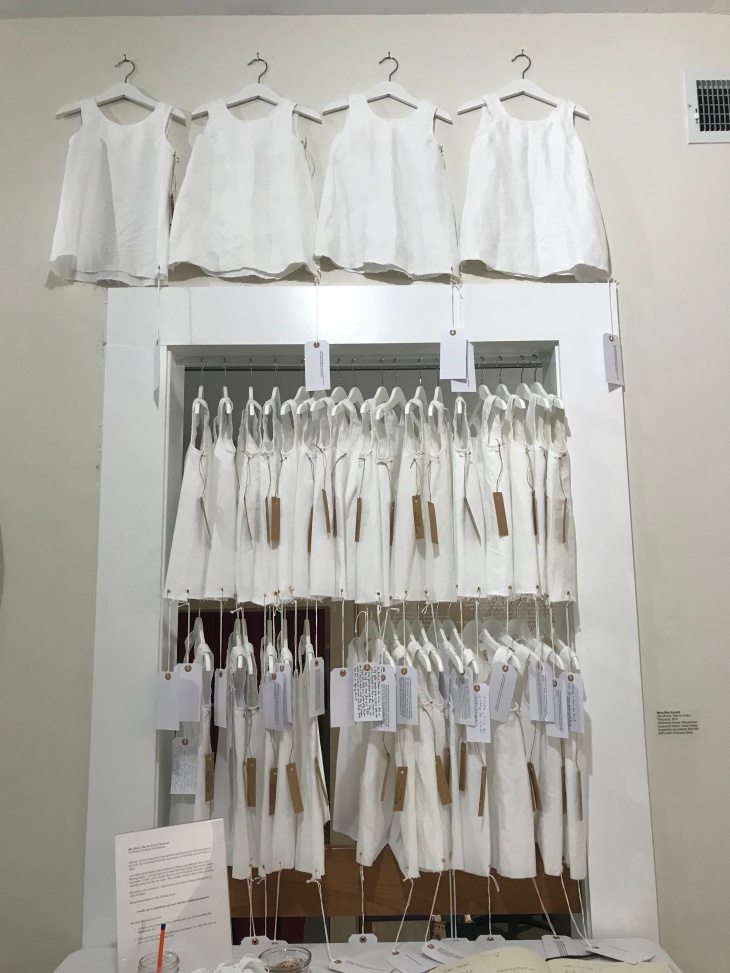 Arnold’s installation was incredibly moving for me. In her artist’s statement, she writes,

I was two and a half years old when I made the 18-hour trip from Seoul to New York on an early spring night in 1974. I don’t know who helped me dress that morning, but what they chose for me – a simple, a-line dress – has been the only tangible link I have to the country of my birth. Two years ago, when I discovered that I had misplaced this dress, I decided to re-make it as an act of reclaiming my own cultural lineage.

“(Re-)Dress: One for Every Thousand” is composed of 200 individually-made white dresses in a symbolic attempt to re-dress the estimated 200,000 Korean children adopted abroad. The dresses are made from recycled domestic linens – tablecloths, bedsheets – as a way to foreground the unknowability of their prior domestic life. The color white is traditionally associated with mourning in Korea, and this piece shifts the adoption narrative from the “happy ending” for the lucky orphan to a more complicated meditation on what is lost – for the child, for the culture, for the nation…

As part of the installation, viewers will be invited to contribute cherished childhood memories on white cards which can then be pinned to the dresses themselves. With this gesture, memories are gifted to the adoptees, who might not have such memories of their own. Visitors to this site may also contribute a memory through the link below.

The dresses are the first thing you see when you walk into the JAC. The dresses are displayed along one whole wall and up a short flight of stairs there is another display along with the artist’s statement and other materials, including the tags where visitors can write childhood memories to be attached to the dresses. 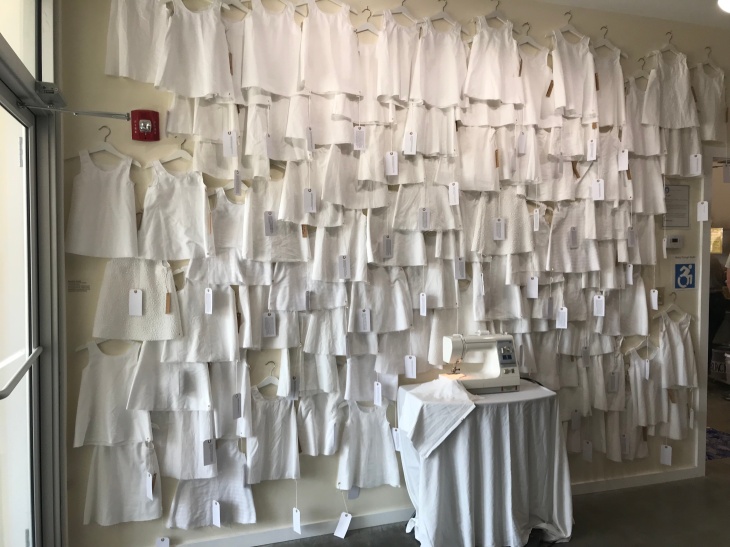 The dresses are unfinished; the lightly frayed, unfinished hems symbolizing being sent too early; one of my friends who was with me, a Korean adoptee, said about the linens being used, “this is what would have been thrown away, disposed of.” The dresses are all exactly the same shape, but varied in the fabrics used, mimicking the way each of us adopted from Korea are both the same and unique. 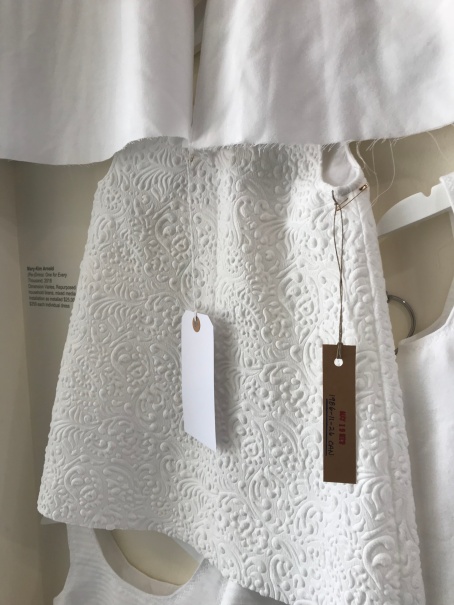 Many of the dresses have a brown, craft-paper tag with a date and the initials of a country. These represent the estimated birth dates of an adoptee and the country where they were sent. The dates span from 1949 to 2003. I spent some time looking for a tag that was closest to my birth date and found only one from the year I was born (1968) in my search, though from Arnold’s book, I saw there were four from that year. 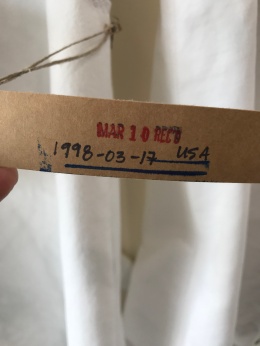 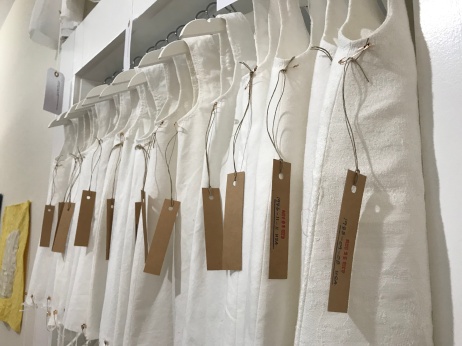 Arnold writes, on her blog,

We are exposed to so many data points that stand in for human lives. Every day, I see the numbers of the dead – from the disastrous effects of climate change, from gun violence, from the endless wars in which we now participate. The numbers of stories of sexual assault and violence. The relentless stream of numbers can be deadening. It is too easy to gloss over, to lose track. 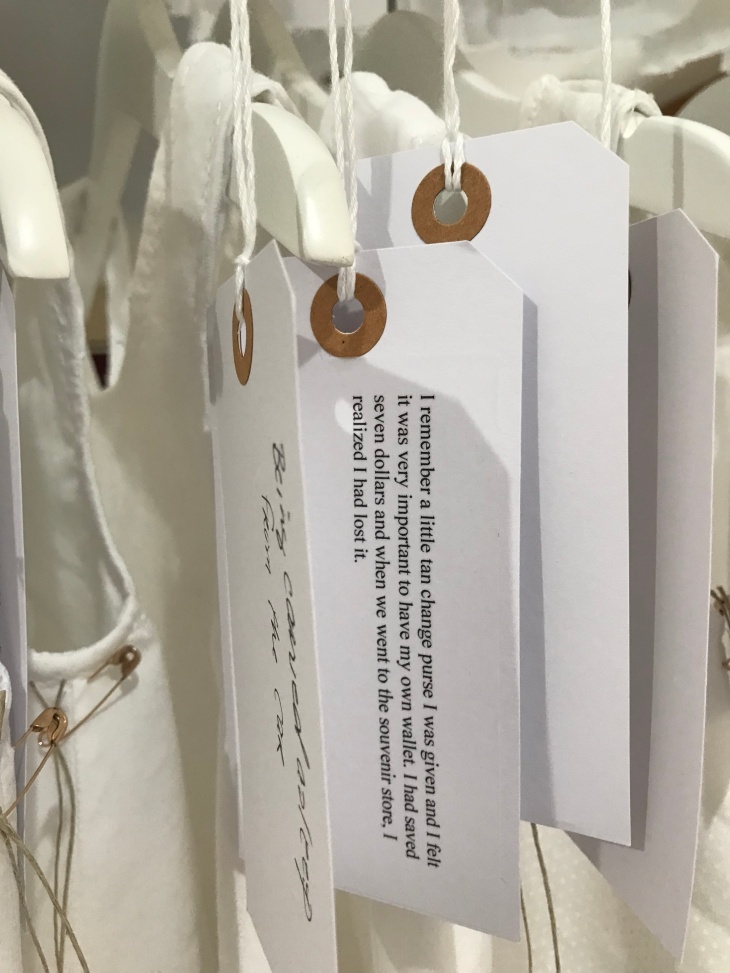 I'm a fan of Star Trek and there are a lot of episodes throughout the different series that have parallels to adoption. I'm making my way through the Deep Space 9 series and just watched an episode where a Cardassian child is adopted by a Bajoran family. The Bajoran family has taught the child to hate his race. When asked how his Bajoran parents could hate Cardassians but love him, the boy replies that his parents hate -other- Cardassians, he is not like "them." This reminds me of all the transracial adoptees who are adopted by white parents who hold prejudicial and/or racist beliefs about people of color but see their child of color as an exception, as not like "them." For anyone interested, it's season 2: episode 5 Cardassians.
What are you doing today? I am watching Eyes On The Prize. Injustice anywhere is a threat to justice everywhere. We are caught in an inescapable network of mutuality, tied in a single garment of destiny. Whatever affects one directly, affects all indirectly. - MLK Jr.
New blog post critiques the use of "forever family"
Heading to DC to educate congressional staff about adoption research! Looking forward to being part of the Research to Policy Collaboration.
Newest article out in adoption quarterly. Continued work on the experience of adoptees.
×
%d bloggers like this: