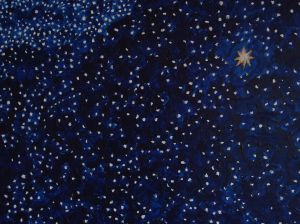 Back when Aimee Mann was still part of Til Tuesday, she co-wrote
(with Elvis Costello) a song called "The other end of the telescope."
Her lyrics include:

There, there baby now, don’t say a word

Lie down baby, your vision is blurred;

Your head is so sore from all of that thinking,

I don’t want to hurt you now, but I think you’re shrinking.

Sometimes I think this perfectly sums up how we tend to look at
adoption. When we look through the telescope and see how enormous and
vast the galaxy is, is it any wonder that we feel small and
insigificant? How do we, small little creatures that we are, affect the expansive universe? we think to ourselves. And so we pivot the telescope and look at life through the other end.

The problem is that while looking through the other end, analyzing
every teeny tiny little speck, it is easy to believe that this
individual microbe is supposed to be representative of the entire
experiences of every other person who is part of the adoption triad.
And this is comforting. It means that if we look at the world from the
other end of the telescope we don’t have to think about the big picture.

One of the most difficult aspects to being an unofficial
"spokesperson" for Korean adoptees is that I’m just one microbe, one
amoeba, in the petri dish. I can’t speak for everyone else’s
experience. I can only speak for mine. And while there are a lot of
things I have in common with other Korean adoptees, I often bump into a
Korean Adoptee who has had a very similar life experience but regards
their experience in a completely different way than me.

Unlike bookshelves from IKEA, there is no way adoptive parents can
build the adopted child’s life together correctly, and it’s not just
because the instructions are lost in translation.

There’s no Adoptee™ Manual. There are several, and they all have
different advice and different pitfalls. Like the post I wrote the
other day, in which I ask about what adoptive parents tell their
internationally adopted child about geopolitical circumstances that
factor into their adoption; for some reason, one adoptive parent
thought I was saying I knew all the answers.

I would never pretend to know all the answers and I would never
mislead an adoptive parent by saying there was a "one size fits all"
way to make sure their kids end up adjusted and happy. That’s because each adoptee experiences their lives in their own, unique way.

There will likely be big themes that many or most adoptees will
experience. This is what we older adult adoptees have been trying to
disseminate to adoptive parents. Big issues such as race, being the
"other" in both family and society, issues of diversity, birth mother
grieving, loss of culture and language being some of these.

But not all adoptees will experience even these big ticket items in the same way.

What I would hope for, though, is for adoptive parents to
occasionally swing the telescope around and look at things from the
broader perspective. I know many are doing this already.

I speak out about intercountry and transracial adoption so that
adoptive parents have an idea about what kinds of things adoptees might
think about or feel about their experiences. By listening to adult
adoptee voices, adoptive parents might be able to educate themselves by
tucking away this information when or if it comes up with their child.
Think of it as an emotional savings account which you can draw upon if
you have an emotional adoption-related emergency in the future.

There are a million things my parents could have done better in
terms of addressing my adoption and there are a million things my
parents did exactly right. There seems to be a lot of nitpicking going
around about what we adoptees write about or say; and I agree that a
lot of it seems contradictory. That’s because there is no secret
formula for getting it right. That doesn’t mean that adoptive parents
should give up and dismiss adult adoptees, nor does it mean that
adoptive parents need to drive themselves into a frenzy trying to do it
all.

Even better is if we take a break once in a while from our naval
gazing and our star gazing to just set the telescope aside. Otherwise,
we won’t see the people standing right next to us.

© 2006-2022. This content on this web site is copyrighted. Content may not be republished, reprinted or repurposed without permission. Short excerpts and links are encouraged, but for permission to quote an entire post, please email me at harlowmonkey at gmail dot com.